The Rice Nature Preserve, located east of Main Street in Wilbraham, was acquired through the cooperative efforts of former landowner Jesse Rice, the Town of Wilbraham, the Minnechaug Land Trust, and the Commonwealth of Massachusetts Self-Help Program. It abuts other existing Town-owned conservation lands located to the east.

The Minnechaug Land Trust(MLT) conducted a signature petition during 2004 to put the Community Preservation Act(CPA) on the ballot in Wilbraham. The CPA was adopted with a 1-½ % surtax on property taxes, or about $35 per year at the time for the average taxpayer. CPA funds may be used for open space, recreational facilities, historical preservation, and housing. Locally raised CPA funds are matched by the State, with 100% as the matching rate to date.

MLT also worked with the Town to obtain a State Self-Help grant to provide part of the funding for the purchase of the Rice property that became the Rice Nature Preserve(RNP), and conducted private fundraising.

In early May, 2005, at Town Meeting, the vote was nearly unanimous to authorize the Selectmen to purchase the Rice property as Town Conservation land. The purchase of the 150-acre parcel took place prior to the end of May.

RNP is currently managed by MLT under a land management agreement with the Town Conservation Commission.

Finally, in November 2006 the Town of Wilbraham signed a purchase and sale agreement to put the lower 90 acres of the farm under an Agricultural Preservation Restriction, which means that the land is protected from development while continuing to be farmed by the Rice family. The total payment was somewhat less than $1 million, of which $189,000 will be funded by the Town of Wilbraham through the Community Preservation Act tax adopted at Town Meeting.

On the right is a photograph of the Rice Fruit Farm in Wilbraham, looking towards the East. The upper 150 acres are now known as Rice Nature Preserve and belong to the Town of Wilbraham. The lower 90 acres have been placed under an Agricultural Preservation Restriction (APR) and will continue to be owned and farmed by the Rice Family. The red line is a rough sketch of part of the dividing line between the two properties. The trailhead on Highmoor Drive is just below the bottom right corner. Sunrise Peak is at the top right.

The public may use the Rice Nature Preserve for passive conservation and recreation purposes, subject to reasonable regulations by the Wilbraham Conservation Commission. Principal public access to the property is located at the main trailhead at the end of Highmoor Drive. Parking for eight cars is provided on the Highmoor Drive cul-de-sac.

The Minnechaug Land Trust maintains the property under a land use and management plan with the Wilbraham Conservation Commission. Tax deductible donations for maintenance expenses can be made by sending a check to the Minnechaug Land Trust, PO Box 455, Hampden, MA 01036, indicating “Rice Nature Preserve Stewardship Fund” in the left hand corner. 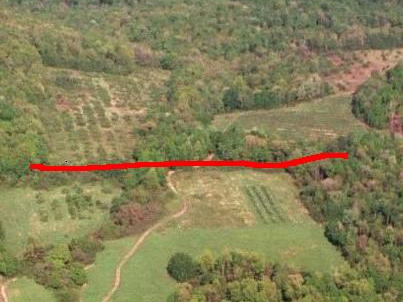 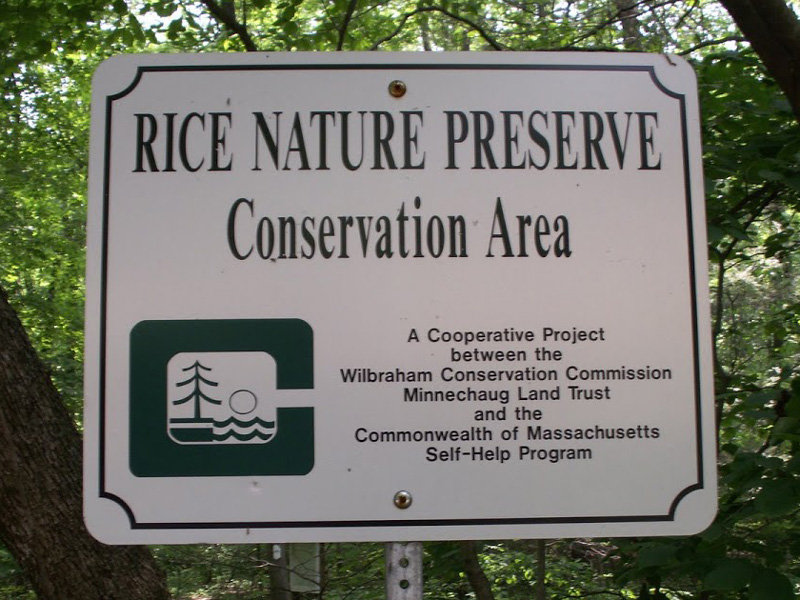 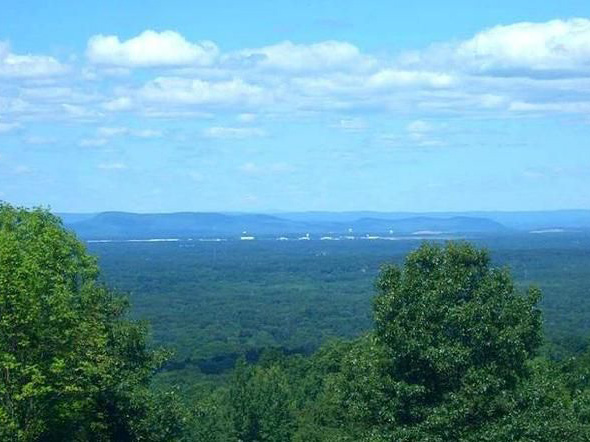 Leave No Trace
If you pack it in, pack it out! Leave nothing but footprints. If you will not be reusing the map, please return it to the map box. 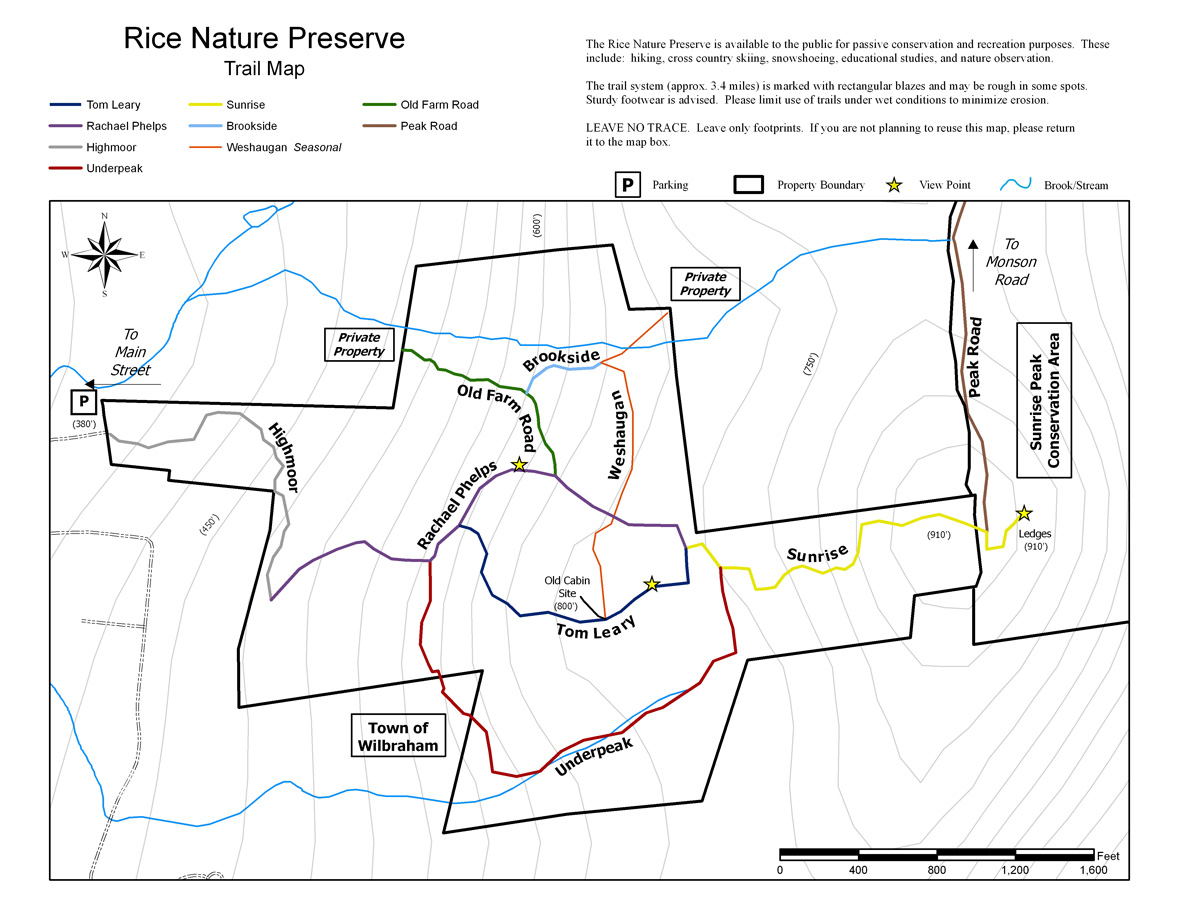 Highmoor Trail is the primary access to all trails in the Preserve (RNP) and begins at the rotary at the end of Highmoor Drive.  Marked with white blazes on trees along the route, it enters the woods and passes the kiosk where hikers will find pertinent information, before it proceeds upward until it comes to a “T” with the Rachael Phelps Trail where two white blazes signify a left turn.

Rachel Phelps Trail is also blazed in white, is an easy climb on old farm roads that breaks through the woods and opens to a stunning view of the orchards below.  Be sure to hike up a little further where on a clear day, you can see terrific views of the Connecticut River Valley, the Mt. Tom range and the foothills of the Berkshires. This much alone is a fine hike, about a mile roundtrip, for children and others desiring a rewarding and reasonably easy hike.   Watch for circling Red Tailed Hawks! The Phelps trail continues upward, leads through the upland meadow, and ends at a junction with Sunrise, Tom Leary Rise, and Underpeak.  Rachael Phelps was a Springfield teacher who left funds to the Allen Bird Club that helped save this land.

Underpeak Trail, blazed in clear red, is the first trail that branches off to the right from the Phelps Trail going up, mostly on an old farm road in a serene ravine, but sometimes scrambles over rocks.  The quiet hiker will be rewarded by sights and sounds of wildlife, perhaps a fox, a glimpse of a scarlet tanager or a shy hermit thrush, and surely a Red-bellied Woodpecker. It curves around the base of the peak and rises sharply at the end to meet at the junction area with the Sunrise, Phelps and Tom Leary Rise.

Tom Leary Rise, blazed in bright blue, is named in memory of one who coordinated the efforts of many to establish the Rice Nature Preserve and who laid out the trail system. This second trail branching to the right from Phelps does rise rather abruptly, offering a few views to the southwest, past Rattlesnake Peak and over the elevated height of land until it meets the junction of Phelps and Sunrise. On a clear day, one can see Mt.Greylock in the northwest, excellent views of the Mt. Tom range, and to the north, the Mt. Holyoke range and beyond.

Sunrise Trail, blazed in yellow, begins where Rachael Phelps ends, and continues to climb upwards over Sunrise Peak (910’) and fall to the rocks below known as Sunrise Ledge, a fine spot for viewing the sun rise, or a hearty snack and rest while looking to the valley below and beyond to the east.  The trail leaves the Rice Nature Preserve when it crosses the old Peak Road onto property owned by the Town of Wilbraham. It is a bit less than a mile over and back.

Weshaugen invites you to explore the two meadows, with a trail marked with orange connecting the two, intersecting with the Brookside Trail. It is seasonal, closed during nesting season except for the access to Rattlesnake Peak near the top of Rachael Phelps, where it hugs the woods to the south.

Brookside Trail, is a pleasant but rocky trail alongside part of the brook that drains the mountain and flows into the Mill River.  Blazed in Light Blue, it begins where Weshaugen connects the two upland meadows and comes out on Old Farm Road that leads down into the private land of the Rice Farm, or upward where it meets the Rachael Phelps trail, blazed in white, to return to the Parking Lot.

Dedication of the Bench at Rice Nature Preserve 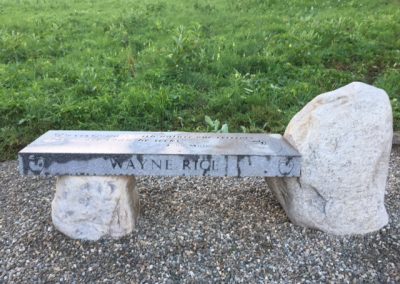 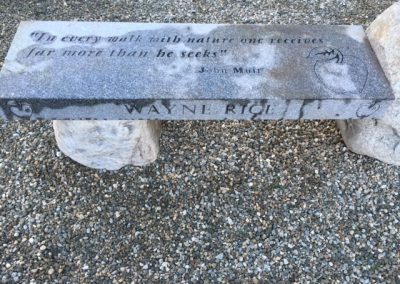 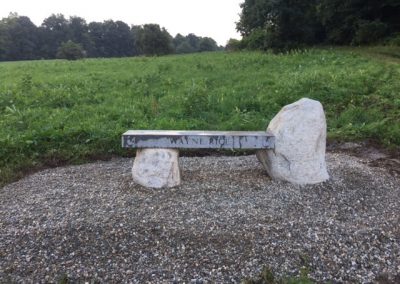 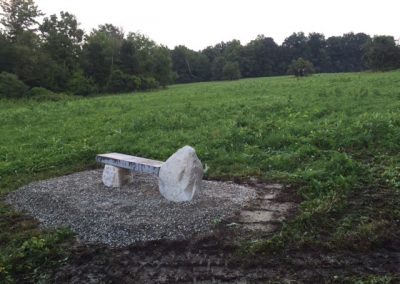